BBC News wrote:The Foreign Office has apologised for a "foolish" document which suggested the Pope's visit to the UK could be marked by the launch of "Benedict" condoms.

Called "The ideal visit would see...", it said the pope could be invited to open an abortion clinic and bless a gay marriage during September's visit

http://news.bbc.co.uk/2/hi/uk_news/8642404.stm
Benedict Condoms, what a great idea. I suppose if a company released them, they could get fined. Would you think it would work, or that a company could release them.
I'm just making a small poll, do you like the idea of Benedict Condoms? Yes or No.
Top

I'm sure the French did this some time back. In fact : 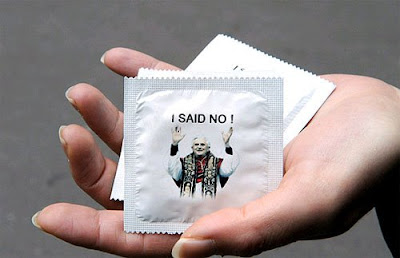 The universe is huge and old, and rare things happen all the time ~ Lawrence Krauss
Cork Skeptics
Top
Post Reply
4 posts • Page 1 of 1