Christopher Hitchens beat Tony Blair 2:1 in a debate on whether religion is a force for good. A 23-nation opinion poll shows slightly more than half of all people agree with Hitchens that religion impedes social progress.

The BBC has put a more indepth report up Blair and Hitchens keep the gloves on 09:13 GMT, Saturday, 27 November 2010

In the blue corner (actually green, on the organiser's website), the former prime minister and famous Catholic convert, whose foundation promotes "faith as a powerful force for good in the modern world."

In the red corner (yes, red), one of the intellectual world's best known and frequently controversial atheists. This is the man who once called Mother Theresa a "bitch". He's also criticised Blair's "sickly piety." 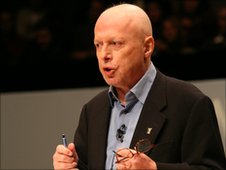 CH-"Once you assume a creator and a plan, it makes us objects in a cruel experiment whereby we are created sick and commanded to be well," he said.
"And over us to supervise this is installed a celestial dictatorship. A kind of divine North Korea."

TB-"Bigotry is not a wholly-owned subsidiary of religion," he complained, striking a defensive note on several occasions.
"I do not deny for a moment that religion can be a force for evil," he said. "But I claim that where it is it is based essentially on a perversion of faith."

edit: There's a 2min video clip.
Atheist Ireland Youtube
HOME RULE not ROME RULE
If I'm your mission shepherd, best give it up, your welcome on my boat..god aren't. -firefly
Irish Federation of Astronomical Societies-links to local clubs & news
Top

Just cracked open a Bamberg Rauchbier (weizen) and settling in to watch it now.
Top

So far his arguments are typical theist arguments. Literally nothing I have not heard before. It is like a "debating 101" pamphlet for a first year class on how to debate for religion...

... however I am struck by what I have heard before even at the worst points of his career... Blair is instantly likeable. Whatever it is about him, even though he is smarmy in a lot of ways, you just have to like him.

The highlight of this came for me when he said to hitchens that you can not judge religion by bad practitioners of religions... just like you can not judge politics by bad politicians.... and he paused right there knowing the audience were going to laugh... well aware that a vast number of them view him as just that and not caring a jot either way. It was disarming. The man has charisma and knows how to use it, I will concede him that.
Top

What was the result. I watched all the way to the end of the you tube version and it ended before they announced the result!

Post Edit: I see the BBC article suggests he won by a margin ot 2 to 1. Does that mean a two thirds difference between the way people voted before and after the debate or two thirds of the final vote?
"The fact of your own existence is the most astonishing fact you will ever have to face. Don’t you ever get used to it." - Richard Dawkins... being shrill and offensive again I suppose.
Top

Larry Moran says in his opinion it was a tie:


Both speakers increased their numbers by about 10%. In simplistic terms, the undecided members of the audience split 50:50 on the question.

That's a tie by my calculation. The blogosphere is reporting this as a huge victory for Hitchens but it didn't seem that way in Massey Hall in Toronto. Just because Hitchens started out with 57% of the votes doesn't mean he won the debate. (Although I think he did.)

The universe is huge and old, and rare things happen all the time ~ Lawrence Krauss
Cork Skeptics
Top

There were 21 percent undecided. Of these a massive 11 went for Hitchens and a mere 10 for Blair. Hitchens won easily.

Hitchens started with about 60% of the vote so of the undecided you would expect about the same proportion, about 12 percentage points, to lean his way. In fact, he fell way short of 12 with a paltry 11. Blair won in a landslide.

Other interpretations are possible.
Top

I listened to Blair somewhat carefully hoping he would have something good or at least interesting to say but all I kept hearing was "Faith is good", "when it's bad that's the perversion of faith".

How would the religious feel if I started and perpetuated this rhetoric throughout the debate with "Faith is bad", "when it's good that's the perversion of faith"?

You're asserting something - and conceding an exception that isn't falsifiable. Assuming someone can only act as a binary good or bad agent with faith in their sheath; in either case faith is good.

I always find the debate about whether religion is harmful considerably more complex and hairy than the debate on whether God exists. It involves quantifying collective harm which is difficult to do. Can it be said that a man who intentionally saves the life of ten people but kill one intentionally have done more collective good than bad? Can harm really have a simple underlining arithmetic?

It both easier and more useful to condemn specific religious beliefs that are preached today, i.e. Religion X is wrong for doing Y.

Sit down with a person and say "religion is not a force for good in the world". 4/5 will object and you'll argue all night and neither of you will really be convinced of either. Sit down and be critical of a specific religious belief and success is far more likely.

Science has been doing this marathon chipping for centuries. Divide and conquer, pick one little bit and take it. Let people investigate their own doubts after they've been wrong a few times, they'll begin to question the rest of it themselves. Science thrives on criticism while it's caustic to religion. This is why the religious put so much time and resources in to evading it.

So while both speakers are charismatic, prolific and eloquent as always. I find the motion to be over ambitious given the time frame. It's controversial and appeals to populism. Everyone here is pretty familiar with most of the arguments and it's a fair comment that nothing new was really said.
http://www.positiveatheism.org/hist/quotes/mencken.htm
Top

Dev wrote:Can it be said that a man who intentionally saves the life of ten people but kill one intentionally have done more collective good than bad? Can harm really have a simple underlining arithmetic?


Perhaps the question is made clearer by asking how would that man have acted in both cases if he had not believed in any gods.
The universe is huge and old, and rare things happen all the time ~ Lawrence Krauss
Cork Skeptics
Top
Post Reply
14 posts