Ah lads, I said I was going to be away for the weekend. Its going to take me ages to read this never mind reply to it.
Top

brianmmulligan wrote: I hate to break this to you, but examples are not evidence. I was referring to proper research. Examples are statistically unrepresentative and also, being uncontrolled, they cannot guarantee that they are measuring correctly. What I meant, is are you aware of any research evidence or is this just your opinion?

Oh are you just ignoring what I said before? If you read the Selfish Gene, actually read the book and not just the cover you would see that what Dawkins says, and you don't get authorities much higher than that, humans have an inherent drive for their genes to survive. He implicitly says that this does not make humans inherently greedy.
Engels's "The Origins of the Family, Private Property and the State" looks in depth at contemporary (to Engels) anthropological study in this context. More recently Jared Diamond's superb book Guns Germs and Steel, backs up my hypothesis. There is plenty of work out there on this subject.
Top

Marcas wrote:Ah lads, I said I was going to be away for the weekend. Its going to take me ages to read this never mind reply to it.

Let that teach you not to be taking weekends off!

FXR wrote:The question is what has evolved into the most dominant system on the globe today. The answer is CAPITALISM. Is it driven by GREED? Yes!

So what, the dominant system in the world used to be something else and something else before that. Feudalism was based on the idea that kings were gods representatives. Does this mean there is a god?
Anthropology shows, time and time again, societies where greed was not a factor or was a very minor consideration. Saying that because Capitalism is the dominant system in the world right now; Capitalism is driven by greed and therefore people's primary motivation is greed is as daft as saying in 1977 that Fodue will never go out of fashion. Society and culture are dynamic not static or stagnant. The set of values that Capitalism is based on were not widely popular four hundred years ago but became popular when material conditions caught up with the old order and combined with the subjective factor - the Revolutionary movements in Europe and North America - and swept aside all that went before.

And there was a time a French peasant would have had you horsewhipped for dissing Louis XVI but a few years later he would have done the same for defending him. The dialectical rules that govern society are similar to those in science. An important dialectical law in society is the law of quantity and quality. This is similar to the concept of phase transitions in thermodynamics i.e. an abrupt change in one or more physical properties, in particular the heat capacity, with a small change in a thermodynamic variable such as the temperature.
A large number of small (quantative) temperature changes in and of themselves seem to have no bearing on the physical state of a body such as water. It remains a fluid. However these quantative changes build up and one more (the metaphorical straw that broke the camels back) forces a qualative change in state. Water an fluid, becomes steam, a gas.
In society, quantative changes seem to have no effect on society. But there is always volatility under the surface. Eventually one innocuous event can trigger a conflagration.
Top

Marcas wrote: In society, quantative changes seem to have no effect on society. But there is always volatility under the surface. Eventually one innocuous event can trigger a conflagration.

Like when the people of Eastern Europe threw off the communist yoke in '89?
Top

Marcas wrote:Ah lads, I said I was going to be away for the weekend. Its going to take me ages to read this never mind reply to it.

Dont worry Marcas, thats the beauty of capitalism. You're not obliged to do anything you're not being paid to do!

Human communication is a very rickety rope bridge between minds. Its too narrow to allow but a few thoughts to cross at a time. Many are lost in the chasms of noise, suspicion, misinterpretation and shooting the message through dislike of the messenger.
Top

Marcas wrote: In society, quantative changes seem to have no effect on society. But there is always volatility under the surface. Eventually one innocuous event can trigger a conflagration.

Like when the people of Eastern Europe threw off the communist yoke in '89?

Absolutely. Overthrew the Stalinists of course. This is exactly the point i am making. Using the logic FXR was using earlier I would have deduced back in the 70's that the people of the USSR were putting up with the bureaucracy and Stalinism, so they would do so indefinitely.
However I hope you know that when the protest movements started, they were campaigning for "democracy" not capitalism. They wanted rid of the bureaucracy. Its well documented that the CIA saw the opportunity to bankroll capitalist elements within these movements and direct them towards market restoration. The KGB and some of the bureaucrats seeing the game was up said, yeah fine, Capitalism it is and made a grab for as many state assets as they could. Now wealth that was previously being used to provide health care and education to the citizens of the USSR is keeping Chelsea in silverware and other similarly useless endevours of the super rich.
Top

When the Berlin Wall fell in 1989 and my Irish Catholic acquaintances rubbed their hands together with glee, I asked them why they were feeling so happy? I mean, I knew their triumphalism was inevitably going to come right back at them - and I was right!

Oh, its SO much fun being an Observer (outsider) of Irish-Catholic politicking/society. Whatever happened to The Community ??:lol:

Eternity is a very long time, especially towards the end.

Oh right. The Stalinists are to blame. Got it! Even though he is dead since 1953. And the USSR were on their 5th leader since his death by 1989.

I have an alternative theory for you: Central planning for every aspect of a nations economy is a shite system. That's the reason it failed. The market economy works because it lets people make their own choice about their own lives and not have a bureaucrat in a dank grey office someplace make those decisions for you. Bureaucrats who cannot know the first thing about you and what makes you tick.


Marcas wrote: Its well documented that the CIA saw the opportunity to bankroll capitalist elements within these movements and direct them towards market restoration.

Marcus you just get funnier and funnier with your mad conspiracy theories. So if its not Stalin's fault its the bogey men at the CIA. The fact that the countries of Eastern Europe have had 18 years of democracy to sweep the market economy aside and haven't done it doesn't bother you at all? Perhaps that's the CIA's fault as well.

You are a riot!
Top

Former General Secretary of the Communist Party of the Soviet Union, Gorbachev advertising Louis Vuitton bags while being chauffeur driven past remnants of the Berlin War. Now is this what Che Guevara spent years as a blood thirsty revolutionary to achieve? An outrage, I tell ya. The capitalist pig dog, CIA stooge, Big Pharma vaccine conspiracy pushing.......ahhhhhh whatever.... 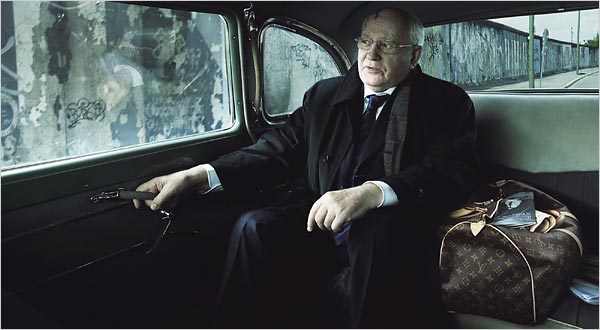 Return to “Separation of Church and State”