How do you introduce sceptical thinking to a family member?

Penn and Teller did a "area 51" episode in their series "Bullshit". Maybe a good start?

Zero: Can you remember the title of that doc or even part of it?
Pope says atheists pick & choose their morals. Correct. Today I will be frowning on child abuse & not having a problem with homosexuality.
Top

Tulip1 wrote:Strictly speaking UFO is just Unidentified Flying Object. So they do exist and yes they are probaly covered up or denied by government because they are/were aeroplanes like Black bird and the flying wing. And in the 60's they must have looked like something from out of space.

Back in 1980ish I saw a Blackbird flying real low right over my house, at the time I was into planes but still, as a photo of a plane looks nothing like a rapidly moving object, I couldn't pin it on any one plane and it was only a few years ago when I saw a clip on tv of a blackbird flying over head, it was like watching a replay, I could see how someone could feel like a cave animal in comparision to such unknown to them technology, & jump to other worldly conclusions. I think it might have been the same documentry.

Man you were lucky to see one of those, they only made 32. When you look through some of the weird plane designs the US have tested, it's no wonder there have been so many so-called UFO sightings.

Kenneth Arnold's illustration of what he says he saw in 1947 looks quite like the various Flying Wing projects of that time like the Northrop N9.

Then there are a bunch of experimental planes that must have looked like alien spacecraft like the 1940's Flying Pancake and the Martin X24. Not to mention the B2 Stealth Bomber, which can look very alien spaceshippy... 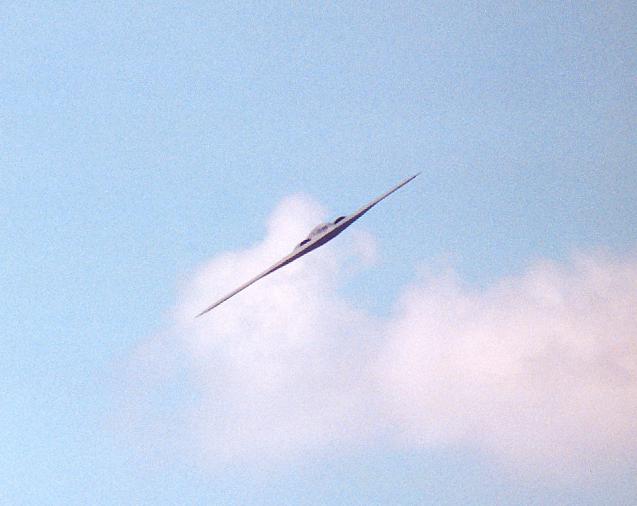 Then you've got unmanned projects currently in progress, like the Boeing X45C. Apparently test flights where a military jet flies alongside the drone aircraft have been interpreted by onlookers as air force pilots "chasing" UFOs!

They lost quite a few of the 32 built due to accidents. Nice looking thing in that pic
Pope says atheists pick & choose their morals. Correct. Today I will be frowning on child abuse & not having a problem with homosexuality.
Top
Post Reply
13 posts